Website Navigation Hint:  In addition to the information in the sidebars, and on this post, click or tap the NEWS ARCHIVES option on the header menu bar to view other stories and events.

The Jackson County Amateur Radio Association held its annual officer elections yesterday, in accordance with the bylaws.  The Officers for 2023 will be:

Congratulations and thank you to each for your service to the club in 2022.  A special thank you to outgoing secretary Teresa, KF5PPK, for keeping us well document in 2022.

Our December club meeting has been rescheduled from December 27 to Tuesday
December 13 (starting at 5:30-6:00pm). This is due to the meeting occurring in the
middle of the holiday week. Instead of our traditional club meeting we will have a brief
meeting and an End of Year Celebration (Christmas Party). The meeting location in
December has also changed to the Country Gentleman Restaurant located in Gautier.
The club has reserved a private section at the restaurant. All are invited to attend
including spouses, family, and guests. I will need a count of people planning to attend
the Country Gentlemen Restaurant. Dutch Treat.

The JCARA 2022 Hamfest/Swap Meet is in the books. We sincerely thank the participating club members effort to create a smooth operation and enjoyable experience for our visiting fellow Hams and other guest.

And a special thank you to the visiting Ham Radio Community from; Mississippi, Alabama, and Louisiana.

The event was an encouraging success.  Entry door tickets were up double or more from 2021.  Table sales was in the 80 – 90% range.  And the face to face QSO’s are priceless. 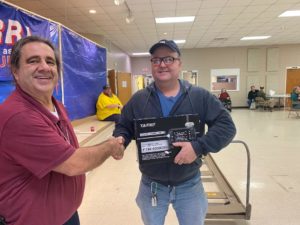 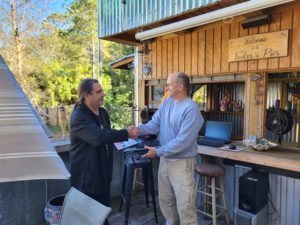 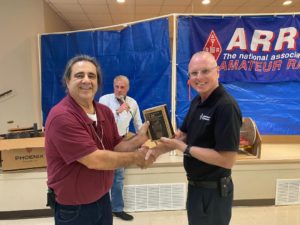 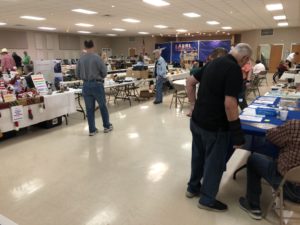 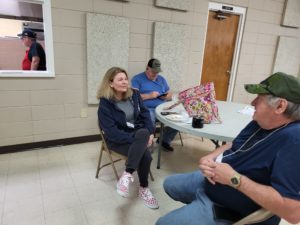 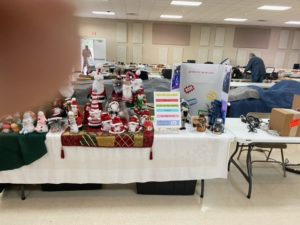 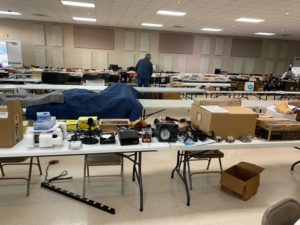 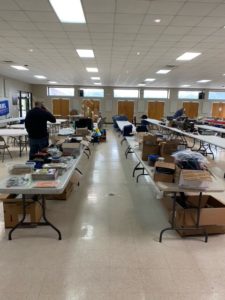 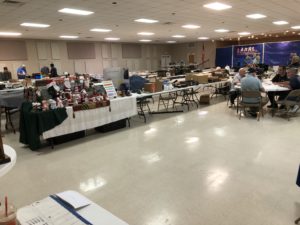 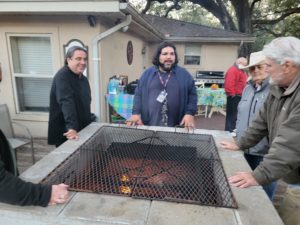 Chilling at Joe’s – after a busy weekend. 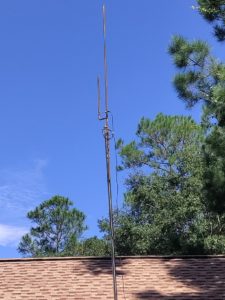 Congratulations, you will be solid in the repeater and simplex if needed in emergencies.

Joe, W5DDX, Thaddeus, KI5KUD, and Bert Rodriguez has repaired NN5AF’s Carolina Windom HF Dipole to approximately 90% of total required repairs.  The remaining task is to install the new feedline when it arrives.  We all know about Supply Chain constraints these days.  NN5AF is worthy of our help because of his military service to our nation, his past service to the Ham Radio community, and his unwavering duty as primary caregiver to his late wife.

Mega thanks to Joe W5DDX and Bert Rodriguez for help to Jim, W5SMN.  Joe and Bert not only performed the deployment of Jim’s, DIY HF Dipole antenna, but also replaced Jim’s truck engine starter. 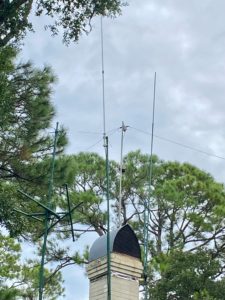 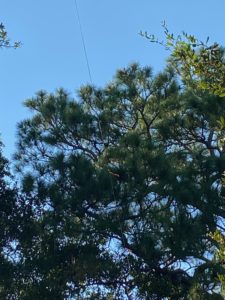 Do you recognize any of W5SMN antenna farm crop that has sprung up around his chimney?

Is there anything better that a fresh starter to get you going on the morning drive?

And Many thanks to Thaddeus, KI5KUD for VHF Antenna Diagnostics help to Kenyon, WO5LFY.

Folks, this is a large part of what Ham Radio is all about.  Neighbors helping neighbors!  We strongly encourage you to inquire about upcoming DIY and React (Reactivation) initiatives then sign on to help.

Conversely, if you could use some ham radio related assistance, don’t be too proud to ask for help!

Jerry, N5MES, was active on HF and VHF from 1987 to about 1999, albeit mostly mobile.  But Family structure/circumstances changed so that ham radio couldn’t be a priority.  Now that Jerry’s youngest is off to college, that old hankering for the magic of RF has returned.

Jerry says “Summits On the Air (SOTA) is a newer facet of ham radio” and of course it drew him in.  Additionally, Jerry loves hiking and camping too.  He goes on to say “Problem is, there ain’t no summits on the (MS) gulf coast.  And, to make matters worse, I always find the hard way to do something.”

Looking at SOTA maps online, Jerry filtered the list to show only those summits that had never been activated before.  There were several around Huntsville, AL and the Huntsville Hamfest was only a few months away!  The summits close to the Hamfest were in Madison County, AL, and none of them had roads or trails close to the top. The county tax collector website has a function where you can click on a map and the property owner, and their address comes up.  Jerry wrote a letter to four different addresses and sent them off via the U.S. mail.

While waiting for replies, about four weeks before the Hamfest, Jerry’s IC-706MKIIG quit transmitting. He could not find an obvious fault visually or with his multimeter and was unable to return it to working status.  Jerry was resigned to failure, when to his surprise, an email arrived from one of the property owners the Tuesday before the Hamfest. She granted permission to access her property and she put Jerry in touch with a friend of hers who is an official of the Land Trust of North Alabama. The official had been to the summit before, and he warned Jerry about snakes, ticks, rocks, and heat.  The official also told Jerry the best place to park and gave Jerry some mapping sites to go to. Jerry says, “I cannot describe what a blessing they both have been.”

Jerry described his predicament to a fellow club member, who was gracious enough to lend a KX2 and 40-10-meter Pack Tenna EFHW [End Fed Half Wave antenna] for the adventure.  Jerry left early Friday morning and arrived at Drake Cemetery close to noon.  Jerry said “I made sure I had water and snacks, put on some boots and long pants and a long sleeved-shirt, and doused my lower half in DEET tick repellent. Rather than taking a direct line to the summit, I took a northeast trek on a path that I thought would be less steep. Even though the landowner said all the properties I would be crossing would be family relations to her, it still unnerved me when I came upon a tree stand after about 200 yards. I’m sure I’m on a game camera or three.  I passed a different tree-stand on the way back to the truck, because I took a more direct route.” 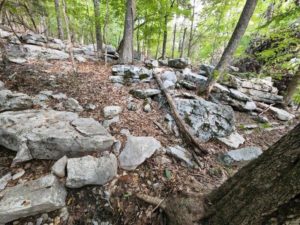 At the summit, Jerry threw an arborists line probably 20 feet up in a tree and hoisted the EFHW aloft. After checking the SWR on 20 meters, nervously, he threw out a CQ Summits On The Air with 12 watts. “It was the first time my call had been on HF in 20 years.” Almost immediately NS7P came back from Oregon. Then KI5GNH/M mobile in Texas! The third was F4WBN in France! “Wow! I then made a summit-to-summit contact with AC1Z operating from W0D/NW-023 in South Dakota.” 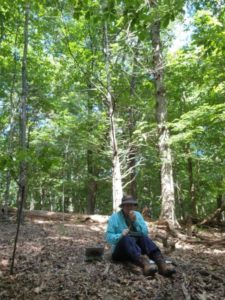 The summit had cell phone service and Jerry had been messaging with Gus, WG5GK, and had spotted himself on the SOTA spotting page.  Jerry and Gus could not hear each other, so after eight contacts on 20 meters, Jerry QSY’ed (see Q code definitions at Ham Radio Q-Codes) down to 40 and made contacts with Gus and Joe, W5DDX, to complete the activation. Jerry still had to climb down the mountain and drive about 20 minutes to the campsite to set up the tent for the weekend.  “I did not want to be wandering around in strange woodlands when even remotely close to nightfall, so after just 30 minutes of operating, I packed up the gear and headed for the truck. 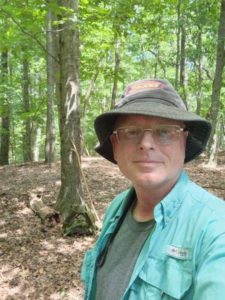 Jerry said “The tent adventure will be another story for a later time.  The next day I met up with the other Jerry, WF5W, and we had a great time at the Hamfest ogling the new stuff and the old stuff and going to presentations of a geeky nature.  I plan on making the Huntsville Hamfest an annual tradition, so call me up around June or July and we’ll make plans together. I’m off to order some QSL cards…”

Have you been able to identify the Summit?  It is Drake Mountain.

Are you Ready for Amateur (Ham) Radio?  Amateur Radio is ready for you!

Have you been considering adding Amateur Radio to your portfolio of readiness assets?  Then read the notification regarding upcoming free online training available soon.  This class will prepare you to take the entry level Technician license exam.

A free, weekly, live, Amateur Radio Technician Class Licensing course on Zoom will begin on Thursday, Sept  8, and will run through Thursday, October  20  (7 sessions).    The three-hour sessions will start at 6:30 PM Eastern Time.  These are the classes that we have been holding for years sponsored by the National Electronics Museum.  Those wishing to sign up should email me at roland.anders@comcast.net. Thanks. 73, Rol Anders, K3RA

The Jackson County Amateur Radio Association will provide testing for your Amateur Radio license on the 3rd Tuesday of each month starting at 6:00 PM.

You will need the following items ready and available before testing …

More stories and information are located in the NEWS ARCHIVE menu/posts.

All licensed operators are invited and encouraged to participate.

Come early for social time!
There will be a coffee social at 6:30 PM and the meeting will start at 7 PM.

The next business meeting date is November 29th 2022 at the St. Martin Community Center.